HOME » RESEARCH » PHYSICAL COSMOLOGY » The Foregrounds of the 21 cm Experiments:

Paper: Jelic, V., and 12 colleagues 2008. Foreground simulations for the LOFAR-epoch of reionization experiment. Monthly Notices of the Royal Astronomical Society 389, 1319-1335.

The redshifted 21 cm, especially, its EoR era, has been the target of a number of ground-based radio observato- ries, especially, radio interferometers. There are a number of recently built and planned new-generation radio telescopes that have produced already a large amount of data, such as GMRT, LOFAR, MWA, 21CMA and PAPER; the newly built HERA and NenuFAR and the planned SKA. Most of these telescopes aim, among other things, to capture the lower redshift part of the evolution of the 21 cm radiation (z<12). Unfortunately, however, none of them, with the exception of the very new telescope HERA and the planned SKA, have enough signal-to-noise to provide images of the EoR as it evolves with redshift. Instead, they are all designed to detect the signal statistically.

The main reason is that the signal is very feeble relative to the galactic and extragalactic foregrounds and goes through significant contamination as it goes through the earth’s ionosphere and instrument response effects. The synchrotron and free-free radiation from the Milky Way and other extragalactic sources dominates the sky by many orders of magnitude in bright- ness  (see Figure 2). Nevertheless, since the foreground emission varies smoothly with frequency, one can differentiate it from the rapidly fluctuating 21 cm signal. This is, however, not as simple as it sounds, since ionospheric and the frequency-dependent response effects of the radio telescopes complicate the fre- quency structure of the, otherwise spectrally smooth, 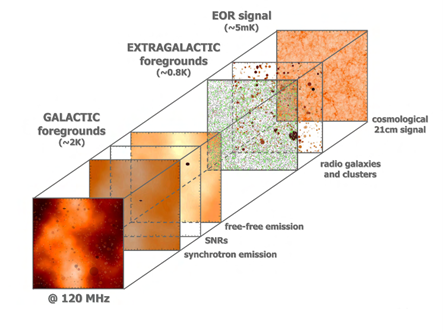 Figure 2: A figure showing the various extra-galactic and galactic components that contribute to the 21 cm measured signal at a given frequency. These foregrounds have amplitudes of about 3 orders of magnitude larger than the expected cosmological signal as indicated from the root-mean-square of each component shown in the figure. (Jelic et al, 2010)