Although water is necessary for life as we know it, a large fraction of water in exoplanet interiors may lead to unique conditions, under which the interior structure differs from the simple layered structure of a water ocean on top of a rocky surface, that supports life.

In this work we use experimental data of ice-rock interaction at high pressure, and calculate detailed thermal evolution for possible interior configurations of ice-rich planets, in the mass range of super-Earth to Neptunes (5-15 Earth masses). We model the effect of migration inward on the ice-rich interior by including the influences of stellar flux and envelope mass loss.

We conclude that when ice is abundant in planetary interiors the planet structure may differ significantly from the standard layered structure of a water shell on top of a rocky core. Similar structure is expected in both close-in and further-out planets. 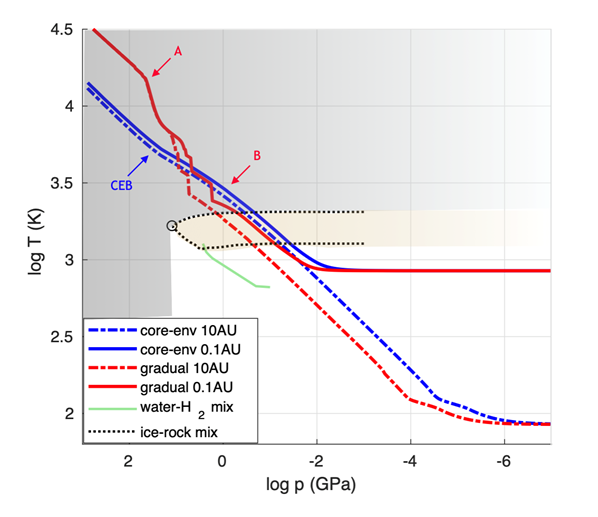 Pressure-temperature profiles of 15 Earth mass planets with 10% gas at the age of 10 Gyr. The same metal (ice and rock) content is gradually distributed (red) or located in a pure metal core surrounded by a gas envelope (blue). Core-envelope boundary is marked with blue CEB arrow, and the gradual composition distribution region expands between the red A-B arrows. The planets are located at 10AU (dashed) or migrated to 0.1AU (solid). In the shaded areas, taken from Fig. 2, ice and rock are expected to stay mixed. Above the hydrogen-water mix curve (green), water is miscible in hydrogen. The mass in the shaded area is > 99% of the planet’s mass for all cases.

Schematic interior structure of ice-rich planets for different mass loss scenarios: no mass loss (left), hydrogen mass loss (middle), all gas mass loss (right). Each sketch is split to show the two interior structures we examined. The ice & rock mixture region covers more than 99% of the planet’s mass for planets in the mass range of 5M⊕ to 15M⊕ (and above).