One of the key results of Einstein’s general theory of relativity was the prediction of gravitational waves (GWs) – `ripples’ in space-time that travel at the speed of light and carry gravitational energy. Such waves are abundantly created when compact massive objects are accelerated. Mergers of very dense objects, such as black holes and neutron stars are an especially prolific source of GWs. Almost 100 years after their prediction by Einstein, they were directly measured for the first time in 2015, coming from a pair of merging black holes, by the LIGO interferometer. This groundbreaking discovery was awarded the Nobel prize in physics in 2017. It was on the 17th of August 2017 that GW detectors observed another type of cataclysmic event: the merger of two neutron stars.

Such mergers are particularly interesting, as they are linked to some of the brightest electromagnetic transients in the Universe – short gamma-ray bursts (GRBs). In short GRBs jets traveling at very close to the speed of light create high-intensity radiation (mainly in gamma rays at first and later across the electromagnetic spectrum, in the stage known as the GRB afterglow). The beaming of light emitted by objects moving at near-light speeds, combined with the jetted geometry of the emitting material, implies that we typically detect such bursts `face on’, where our line of sight lies within the jet’s core. GRBs are so bright that they are typically seen from distances of billions of light-years from Earth. Although GRBs have been observed for over 50 years, some of the most basic questions about their nature remain unsolved, including the structure and composition of their jets and the physical process powering different phases of their emission.

The event observed in 2017, dubbed GW170817, based on its detection date, lead astronomers to point a variety of electromagnetic telescopes to the same location on the sky. Indeed, a short GRB was detected, confirming the link between these two phenomena. However, this GRB was different than any of the previously seen bursts. In particular, the initial gamma-ray emission was much less luminous and the afterglow `light-curve’ (the temporal evolution of the recorded electromagnetic signal) evolved in a distinct way, initially rising gradually for over 150 days and then decaying rapidly. The reason for this difference is that the detection trigger by the GWs enabled astronomers for the first time, to view a GRB jet, quite literally, from a different point of view: from a line of sight far away from the jet axis (off-axis; see figure 1) and coming from a distance much closer to Earth. This enabled us, in turn, to learn in unprecedented detail about the lateral structure of the underlying GRB jet and to better understand how such jets propagate through their environments and develop this structure.

The future of binary mergers jointly detected in GWs and as GRBs holds much promise. An investigation, that Dr. Beniamini, Prof. Granot and Dr. Ramandeep Gill (all members of ARCO) carried in “Afterglow light curves from misaligned structured jets” derives in detail the lightcurves from the accompanying GRB afterglows from jets with different lateral structures, observed from arbitrary viewpoints. Using analytical tools, the study reveals qualitatively different types of light curves that can be viewed in future off-axis GRBs, with either single or double peaks (Figure 2), depending on the jet structure and the viewing angle. It shows that focusing on the shape of the lightcurves from such jets rather than absolute times or fluxes, enables to deduce intrinsic properties of the jet and its angle to the observer, independently of many of the degenerate and therefore unconstrained physical parameters that affect the afterglow properties of `standard’ GRBs. Such robust parameter inferences will provide a crucial stepping stool for numerical investigations, attempting to deduce the underlying physical properties of individually observed GRBs. At the same time, our study can help guide future observational transient survey campaigns, attempting to search for `orphan afterglows’ – GRBs in which the early burst of gamma rays is missed (as the jet points away from Earth) but are detected later in shorter wavelengths (e.g. X-ray, optical or radio) during the afterglow phase when the jet decelerates and its radiation beam widens and reaches our line of sight. 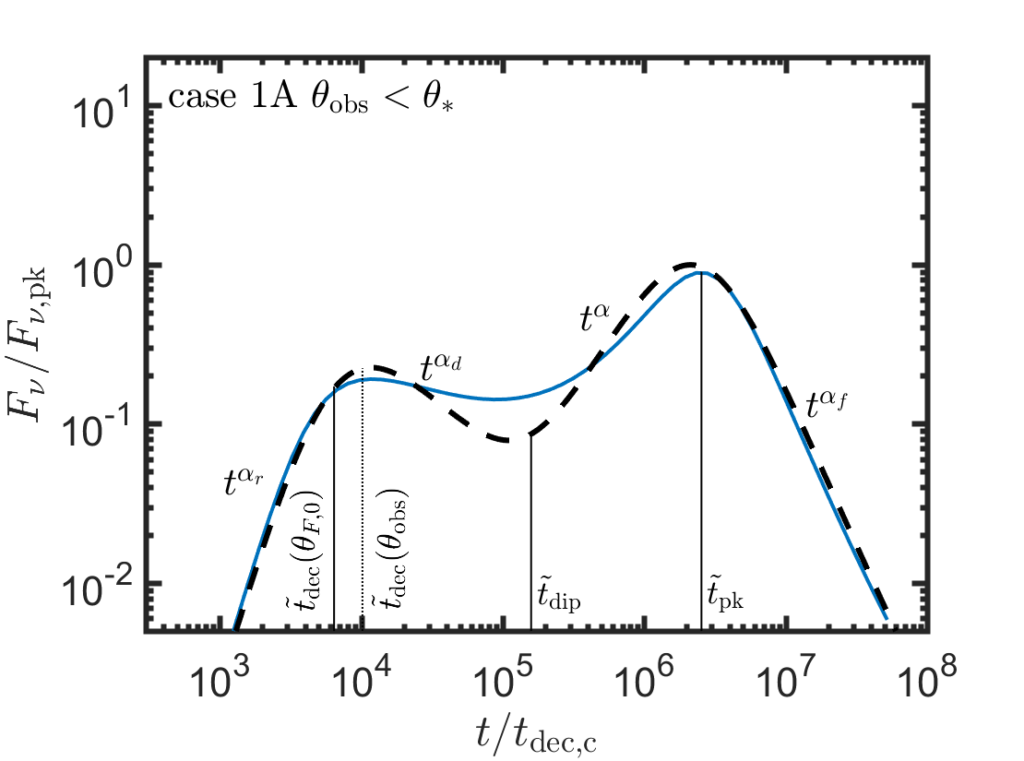 Figure 2 Different types of light-curves that can be viewed by observers misaligned with the jet core. Focusing on the temporal slopes, as well as the ratio of the characteristic times and frequencies provides robust information on the jet properties and observer’s viewing angle, independently of the many other unconstrained physical parameters.