Magnetars are young neutron stars with the strongest magnetic fields in the Universe (surface fields of 1013–1015 G). They probe some of the most extreme physical conditions in nature, such as strong field gravity, huge (nuclear) densities and extreme energy densities. The evolution and decay of their ultra-strong magnetic field powers a variety of X-ray bursting activity, ranging from relatively frequent short bursts to very rare and much more energetic giant flares (GFs), which can dissipate a good part of their magnetospheric energy and eject plasma at relativistic speeds.

Magnetar GFs consist of a short-duration (0.1–0.5 s) bright initial spike followed by a longer (300–400 s) and much dimmer pulsating tail, strongly modulated at the magnetar’s known spin period (of typically a few to several seconds). So far three GFs were clearly recorded – two Galactic and one from the Large Magellanic Cloud (LMC) – a small satellite galaxy of our Milky Way. The most recent and energetic of these events, detected on Dec. 27, 2004, from the Galactic magnetar SGR 1806–20, produced measureable changes in Earth’s upper atmosphere despite erupting from a magnetar located about 40,000 light-years away.  The two Galactic GFs showed longer lasting (days to many months) radio emission, which provided good evidence for the ejection of plasma at mildly relativistic speeds (about 50%–70% of the speed of light, close to the escape velocity from the neutron star) with a kinetic energy comparable to the energy radiated in the GF’s initial spike.

This work reports the first high-energy (with photon energies of the order of giga-electronvolt – GeV) detection of emission from a magnetar GF. This event was from the nearby (3.5 megaparsecs 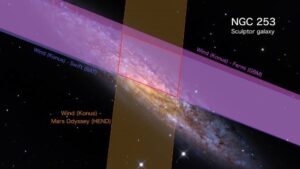 – Mpc) Sculptor galaxy, which is much further away than the Galactic GFs (10-15 kiloparsecs – kpc) or the GF from the LMC (50 kpc), and therefore only its initial spike was bright enough to be detected while its pulsating tails was too dim. The Large Area Telescope (LAT) on board the Fermi Gamma-ray Space Telescope detected GeV γ rays from 19 s until 284 s after the initial detection of a signal in the megaelectronvolt (MeV) band (which lasted 0.14 s, corresponding to the GF’s initial spike). Our analysis shows that these γ rays are spatially associated with the Sculptor galaxy and are unlikely to originate from a cosmological γ-ray burst. Thus, we infer that the γ rays originated with the magnetar GF in Sculptor.

A magnetar produces a steady magnetized wind powered by the very gradual slowing down of its rotation. As the magnetar moves through space, this wind plows into, slows, and diverts interstellar gas. The gas piles up, becomes heated and compressed into a thin curved shell, and forms a type of oblique shock wave called a bow shock.

In the model proposed by the LAT team, with leading roles by Prof. Jonathan Granot and Dr. Ramandeep Gill of ARCO at the Open University of Israel, the GF’s MeV initial spike travels outward 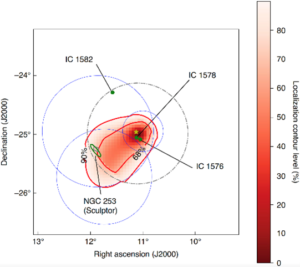 at the speed of light, followed by the cloud of ejected matter consisting of protons, electrons and positrons, which is moving nearly as fast (at about 99.995% the speed of light). After several days, they both reach the bow shock. The MeV γ rays pass through. Then, several seconds later, the cloud of particles – now expanded into a vast thin shell – collides with gas at the bow shock shell. This collision between the two shells drives shock into both of them that accelerates particles, which produce the highest-energy GeV γ rays several seconds to minutes after the main burst.

This new and exciting event shows both similarities and differences relative to the magnetar GFs in our Milky way galaxy. On the one hand, in all of these events the energy radiated in γ rays and the kinetic energy of the ejected matter are comparable. On the other hand, in this new event the ejected matter is much faster, at about 99.995% of the speed of light, compared to about 50%–70% of the speed of light in the two GFs in the Milky way. This much faster velocity implies, in turn, a much smaller amount of protons in the ejected matter, which demonstrates a much wider diversity between different magnetar GFs than was known so far.

This work was published in Nature Astronomy