Shocks (a.k.a blast waves) are a ubiquitous phenomenon in the Universe. In many astrophysical objects, emission all the way from radio through X-rays to very high energy gamma-rays is powered by collisionless shocks (which are mediated by collective electromagnetic interactions rather than by particle collisions). These include relativistic (traveling at very close to the speed of light) blast waves powered by stellar-mass black holes in gamma-ray bursts (GRBs) and supermassive black holes in active galactic nuclei, or non-relativistic blast waves in supernovae.

It is well established that the broad-band (radio to gamma-rays) afterglow emission in GRBs is produced by relativistic electrons that are accelerated at collisionless shock fronts. In particular, these electrons emit synchrotron radiation as they gyrate in the shock-generated magnetic fields behind the shock front. Several theoretical works and numerical (particle in cell – PIC) simulations are devoted to understanding the structure of this magnetic field, which is posited to be tangled and anisotropic –  constrained entirely to the plane of the shock – perpendicular to the shocked fluid’s local velocity. Since synchrotron emission is generally partially linearly polarized, this has important implications for the measured degree of polarization (Π). GRB afterglows show polarization of up to a few percent, which already suggests that the shock-generated field is closer to isotropic (a fully isotropic field gives Π = 0) than anisotropic. Better understanding of the magnetic field structure in GRBs, the majority of which have been observed at distances of billions of light-years, is limited by our incomplete knowledge of the angular structure of the relativistic jet and our viewing angle relative to its symmetry axis, which also affects the degree of polarization Π, thereby creating a degeneracy. 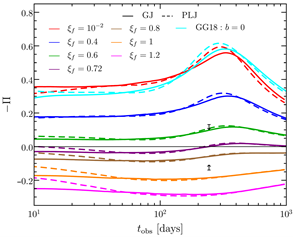 A golden opportunity was provided by the afterglow of GW170817 / GRB 170817A that originated in the aftermath of a merger between two neutron stars only 130 million lightyears away from us.  Dr. Ramandeep Gill and Prof. Jonathan Granot (both from ARCO) used the afterglow from this source to study the properties of the relativistic jet, including its angular structure, in several joint works. In the present work, they used their knowledge of the jet’s angular structure (either a gaussian jet (GJ) or power-law jet (PLJ) and our viewing angle (about 25 to 30 degrees or 5 to 6 times the jet’s core angle), to isolate the effects of the shock-generated magnetic field structure on the afterglow linear polarization. The figure shows several polarization curves marked by ξf, the parameter characterizing the anisotropy of the magnetic field (becoming more anisotropic away from unity) just behind the shock front. The two arrows show the upper limit on the afterglow polarization obtained from radio observations. This work improved the constraints on the magnetic field anisotropy (0.57 < ξf < 0.89) and clearly showed that the magnetic field just behind the shock front is only mildly anisotropic, contrary to several earlier works.

The implications of this study are of fundamental importance for collisionless shock physics. In particular, it suggests that the magnetic field may be produced not only by small-scale plasma instabilities but is instead also strongly affected by macroscopic turbulence in the region behind the shock front, which generally yields more isotropic magnetic fields.